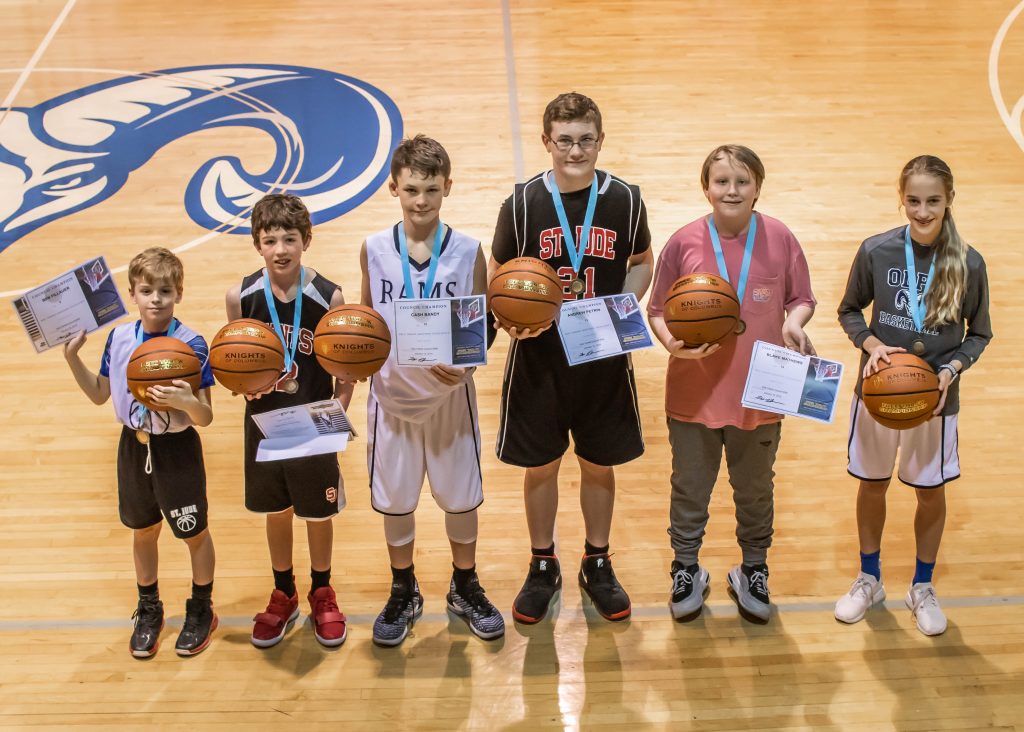 This past Saturday, Holy Family Council #6099, along with help from the newly formed Our Lady of Perpetual Chattanooga Community Council #17184, held our annual Knights of Columbus Free-Throw Championship. Council and District Championships were conducted. We had over a dozen Knights, as well as our District Deputy Rick Powell present to put on our most attended Championship in many years. Special thanks to Mrs. Powell for taking and sharing the pictures.

Council and District Champions from left to right:

END_OF_DOCUMENT_TOKEN_TO_BE_REPLACED

Knights of Columbus Holy Family Council #6099 will be hosting their annual Kid’s Free-Throw Championship on Saturday, January 19, from 2pm to 4pm immediately following the OLPH vs. St. Jude games at the OLPH gym. There are both Boy’s and Girl’s divisions with 6 age brackets each, 9,10,11,12,13,14 for a total of 12 champions.

All boys and girls ages 9 to 14 are invited to participate in the local Council level of competition.

All participants will receive a Certificate of Participation with the Champion of each bracket receiving a Champion’s Certificate and a Knight’s of Columbus Basketball.

Those District Champions are then eligible to compete in the Regional and State competitions occurring in Knoxville and Murfreesboro respectively.

The Knights of Columbus Free Throw Championship is sponsored annually, with winners progressing through local, district, and jurisdictional competitions. International champions are announced by the Knights of Columbus international headquarters based on scores from the jurisdiction-level competitions. All boys and girls ages 9 to 14 are eligible to participate and will compete in their respective age divisions.

Holy Family Council #6099 is one of 17,000 Knights of Columbus councils that make up the world’s largest Catholic fraternal service organization. Founded in 1882 to assist working-class and immigrant Catholics in the United States, today the approximately two million members of the Knights put their faith into action through a broad range of charitable causes locally, nationally and internationally with financial contributions and hands-on service.

Knights of Columbus councils are called to aid their “adopted” seminarians and postulants with moral and emotional support as well as with prayers for their vocation and vocations throughout the church. Knights of Columbus councils provide support in a variety of ways including writing letters and birthday cards to their seminarian or religious postulant, sponsoring dinners to support them, and inviting them to fraternal events.

Holy Family Council #6099 currently provides support to Neil Blatchford. Neil was at the Vatican for Midnight Mass and forwarded this video.

This is a truly inspirational story of a young Brother Knight. What an amazing young man, particularly in light of all of the challenges all youth face today. We encourage you to watch. A message from the Knights of Columbus:

First in the run is Not Your Average Joe, the story of 25-year-old Joe Reali. Passionate football player and fan, he set aside his love of sports to be at his mother’s side during her battle with cancer. This kind of selflessness characterized Joe’s everyday life until his sudden death in 2015. In this feature, Joe’s family and friends bring their memories of this devout and fun-loving young man to the screen.

Joe’s dream was to touch millions. His example inspired Knights to form a new council in his name. And each time you watch the video, you help keep his memory alive.

Help us share Joe’s story — and those of all the “Everyday Heroes” — with friends, family and your whole community: 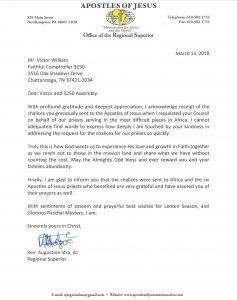 Starting before last Christmas, Knights of Council 6099 and Assembly 3250 conducted a fundraiser by selling Christmas and Easter magnets in and around Chattanooga for a worthy cause. We recently received this wonderful letter. Giving is at the core of what we do, and we are continually blessed by it 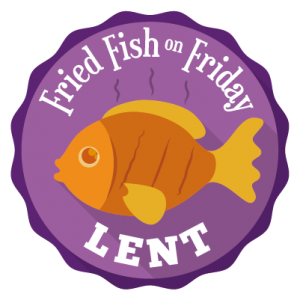 Join us from 5-7 pm Friday evening before or after the Stations of the Cross (6 pm) for Fish, Salad, and Baked Potato.

Thanks to all who have volunteered and attended this Lent!

Get the details here. 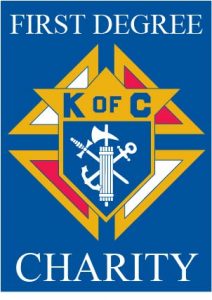 Please join us this Thursday, March 22nd for our monthly Admission Degree. Candidates and Sponsors should arrive at 6:30 pm and the Degree will start promptly at 7:00 pm

Dress code is business casual. Candidates please arrive by 6:30 so we can confirm your paperwork is complete.

Please RSVP to Victor Williams in the form below to let him know you are coming.  If any brother knows of a potential candidate please reach out to Victor so that we can get them on the list.

END_OF_DOCUMENT_TOKEN_TO_BE_REPLACED 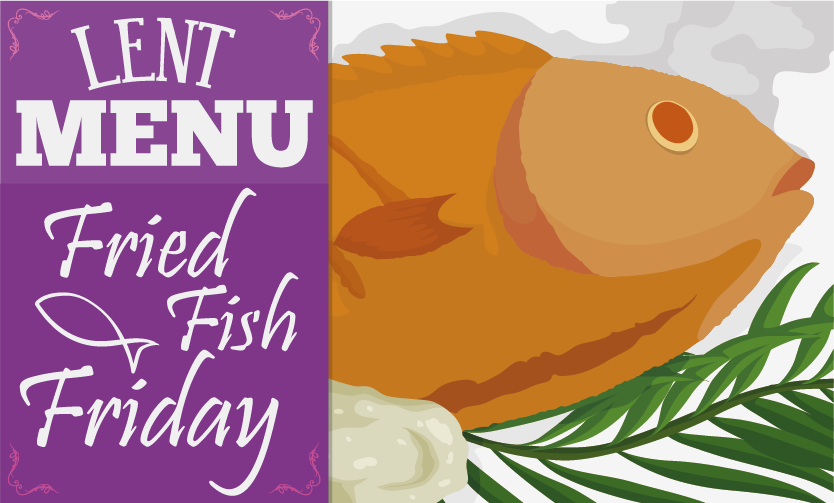 We have only a few of these left. The price is $5 and they are available in the Parish Office or the Book Store at St. Stephen. You can also contact John Vannucci directly. 100% of proceeds are going towards the purchase of Chalices. Apostles of Jesus Missionaries in Africa. They are in desperate need of Chalices. Knights #6099 has answered this plea. Help us fund this worthy cause to enable priests of this order to bring the Sacraments to the needy in this challenging environment. 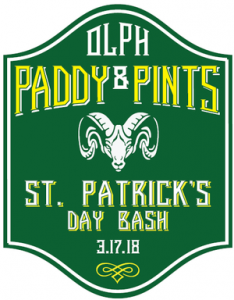 If you are looking for a reason to be Irish on March 17, or just want to show your Irish pride for a great cause, you need to join the celebration at OLPH School’s Paddy & Pints!  Your $50 ticket will include a buffet dinner, catered by Bones, three drink tickets, and a chance to kick back or kick up your heels on the dance floor! We will also be offering you a chance to bid on some fantastic auction items. Holy Family Council 6099 has contributed to this cause.

Insurance and code requirements have dictated an un-planned expense resulting in an expensive upgrade to the current O.L.P.H. playground. Proceeds will contribute to this effort.

Eighth grade students who are a son or daughter of a Brother Knight of Holy Family council 6099 are eligible to apply for this year’s scholarship of $4,000. Applications are available at the Council Hall and Parish Offices. the deadline for receipt of application is April 20, 2018. Please call the O.L.P.H. Parish Office for further contact information.

Thanks to all who joined us on Sunday for our Annual Kid’s Christmas Party. The hall was packed with kids and adults alike. Mike Edwards put on a fun magic show that had the kids laughing, participating, and totally engaged. At the end of his show, Mike introduced the man of the hour, Santa. Santa spent a long time handing out gifts and speaking with each child. There is no equal to our Santa, he’s simply the best! Special thanks to Mike Edwards and Santa for making this event truly special for all the kids. Special thanks also to Harry Mackey and Will Flowers for grilling up awesome burgers and dogs, to Lex for all his hands-on help with setup, food, and cleanup, Craig for finding Magic Mike, Ray Fox for doing some grocery shopping, Roger and John V. for getting the word out, and the Ladies Auxiliary for cookies, Linda Lee for decorating, and Corky, Mike, and many other Brother Knights for making this event possible. It was a wonderful day.

On Friday evening, Holy Family Council 6099 provided and served a meal to Catholic Football, young men from O.L.P.H. and St. Jude, at their last practice before their 27th Annual Choo-Choo Bowl on Saturday. These are fine young Catholic men who along with the Coaches, were very appreciative of the effort. A great time was had by all and afterward they proceeded to the first all school Fall Sports Bonfire at O.L.P.H. What a great night! Thanks to Brothers David, Josh and Chris who delivered the meal and helped serve.